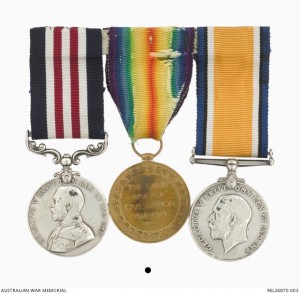 Because Uncle Walter grew up in a large farming family, working as a team to get things done was essential. When Uncle Walter went to war he would have definitely had to work as a team with the soldiers in all battalions especially the people in his own, the 43rd battalion. Uncle Walter was one of thousands of soldiers who left their loved ones and put their lives on the line for their country’s freedom, this takes great bravery. He joined up because he wanted to be with his mates and wanted to follow his brother who had enlisted seven months before.

His actions on the 29th of September 1918, after years of fighting, showed he knew the true meaning of the ANZAC Spirit. The citation written by a Superior Officer of B.W Beinke, and then many years later republished in the Goyder’s Gazette, by John Mannion reads, “On 29th September, 1918, during operations South of BONY, Private BEINKE was a Company Stretcher Bearer and throughout the operation he worked without spell or rest devoting himself to rescuing and dressing and evacuating wounded, and at times going forward almost up to enemy positions in face of very heavy enemy fire in order to attend to wounded men. His actions saved many lives and his splendid heroism was admired by all.” Beinke embarked for return to Australia on 7 February 1919.

The ANZAC Spirit flourished during the time that many men and women of Australia and New Zealand went to war. Showing the elements of bravery, courage and mateship, putting others before themselves, these men and women sacrificed so much for their country that you would never be able to repay them. Clearly, their love and pride for Australia was felt deeply in their hearts. Luckily, Uncle Walter had all of these elements otherwise he probably wouldn’t have lasted as long as he did.